Along the river Shambhavi in Dakshina Kannada, an unbelievable number of ancient and beautiful temples exist. Most of these are thousands of years old and carry an amazing amount of historical significance. There are mainly a lot of Shiva and Durga temples along this line. Even after dedicating myself to just this stretch every time I visit Tulu Nadu, I have not yet managed to cover even half of them.

Sri Mundkur Durga Parameshwari Temple is another such wonderful temple. It is along the Shambhavi river coast and can be reached if one takes the Belmann-Moodabidri road from Udupi. Along with Inna-Muddanu, this temple also was established  by Sage Bharadwaja Bhargava. In fact, this temple along with Inna is the Kula Devata temple for many people in Tulu Nadu who have Bhargava  Gotra. On the day I visited this temple, a special alankara with Sandal paste was made to the main idol and Devi was looking resplendent in a golden hue.

The Ganapathi idol in the temple is fully covered with silver and looks very auspicious. This temple has a history of more than 1200 years old. The priest of the temple took me to the well used to draw water for the rituals. The rings of the well have not been changed over the years and stand as archaeological proof for the age of the temple. There are deep grooves on all the rings which stand as testimony to the fact that this temple has been in existence for thousands of years.

This temple, over the years, had been patronised by the rulers of Moodabidri. In fact, legend has it that the King and Queen of Moodabidri, when visiting the temple praying in front of the idol, the ear rings of the Queen dropped down. The Queen gave it as an offering to the idol. The ear rings are used to decorate the idol of Durga even today. Two wooden pillars were also carved on behalf of the King in memory of this event.

From one of the books available at the temple, I managed to obtain a photo of the idol without any decoration. It is an amazing carving! 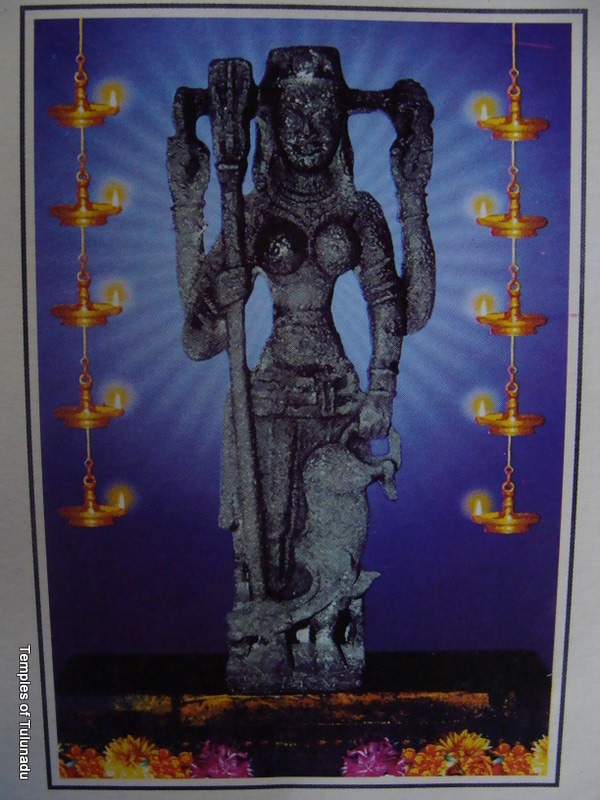 The annual festival in the temple starts from the 22nd day of Makara (Feb) and is held for 8 days. It is considered very auspicious to offer ‘Jaji’ and ‘Mallige’ flowers to Durga here. Hence, a lot of devotees visit this temple carrying these flowers.

How to get there: From Udupi, take the Karkala road via Padubidri. A few kilometres later, take the deviation to Belmann. Mundkur lies on this stretch.

Specialities: Mundkur is surrounded by the river Shambhavi on three sides (East, South and West). Around Mundkur, four Shiva temples are located – Posaral towards South-East, Inna-Muddanu towards North-East, Ulepadi towards South-West and Bola towards North-West.

More photos can be seen here.

View all posts by Hariprasad